I spend a lot of time reading words, writing words, and thinking in words. And I’ve noticed a peculiar feature which sometimes happens to me. I start following the words of people who are involved in a dispute – both sides – more than I refer back to the actual actions involved.

My thought train gets swept along the path of the words, leaving the plain facts of the action at a far remote. It’s a tendency I have to remember to fight against. I want to base my thinking on facts rather than point-of-view interpretations of facts. 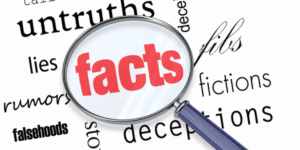 Facts are surrounded by words

Which brings me to President Trump’s recent statement that “everybody would do that” meeting his son, his son-in-law, and campaign manager did with a Russian national about purported damaging information about Hillary Clinton. Now I don’t believe his statement is an accurate reflection of how most people in political campaigns would treat an overture from Russia, but let’s leave that aside for this post.

As soon as media reported his statement, I saw his followers in Mensa (and of course the media) repeat the statement again and again. His statement became their new base of reality. They ignore existing facts. Trump’s excuses shape some people’s worldview more than what actually happened.

It’s a fact that Trump uttered that statement, but his statement is not a fact itself but an explanation. If you want to know the difference between a fact and explanation (i.e. an explanation), read about Facts, Explanations, and Predictions Distinguished.

For a year, Trump denied his staff had meetings with Russia. He called it “fake news” and a “witch hunt.”

If “everybody would have done that,” why did he deny any such meetings?

There is nothing makes a man suspect much more than to know little. Francis Bacon