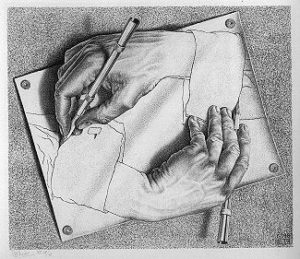 Reading “Determined Friend” a short story I wrote about 15 years ago, I realized I had learned a few new techniques over the intervening years. Perhaps writing them down will help me incorporate them more easily in future stories.

These few points keep me focused on why I am spending effort writing the short story. They also help winnow out extraneous threads that can slip in.

These are meant to provoke the story development and not as iron shackles. For instance, the character flaw can be relative to the plot obstacle rather than an absolute flaw.

After a draft, a revisit to the story premise often occurs.

Most stories satisfy some pieces of this structure and not others. That’s fine. The goal is to help organize the presentation of information to the reader.

In an immediate scene, the flow of time is smooth, unbroken by gaps of minutes of unrevealed actions. It is the proper vehicle to show conflict between characters of opposing desires or goals.

All action is described in a single flowing experience via MiR units.

If reaction is not intuitively understandable, then brief internal thought (i) can mediate

Naturally where the scene occurs in the plot will affect the way you shape the action and reversal climax. The final climax will rarely support a Yes, but or No, furthermore resolution. If that ambiguity is desired, usually the ending

If ifs and buts were but candy and nuts, everyday would be Christmas. Many people claim it.