I read three good books lately. They brought to mind some thoughts about words and writing.

When I was in high school, the English department had a thing for mid-1800s English novels. I got enough of Tale of Two Cities, Return of the Native, and Silas Marner that I never wanted to read about another heath unless the Hound of the Baskervilles was baying in it. But when Great Expectations was mentioned, I recalled my classmate reading it under his desk while the teachers taught. I thought if Griffin liked it so much, I should give it a try.

Charles Dickens in Great Expectations has great vigor of speech and strong lines of characters who stand out. He is strong in displaying characters struggling against fundamental obstacles.

Setting Dickens aside after half of the novel, I picked up George Eliot’s Middlemarch. Interesting contrast. Her characters used a more refined intelligence against obstacles which arise after their positions in society solved the more fundamental obstacles of existing.

The Ways of Language

One essay in The Ways of Language highlighted a mania for “correctness” as the source of our generally horrid and diffcult writing. Before we let others see our writing, we enforce every rule that might apply, sucking out the strength, initiating rigor mortis.

What else accounts for the difference most of us experience between the vigor of our speech and the difficulty of our writing? 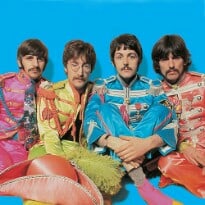 No, this is not about the Beatles songwriting. It’s about a surprise in my Amazon Fire tablet. I was noddling around in its files and found this famous picture of the Beatles.

Was it put there by looking through pics online, possibly automatically or by my unwitting request? Whatever, doesn’t matter. I posted it into Evernote and now I’ve moved it to my computer and Burning Thoughts.
I’m happy just to see it.

The Dickens and Eliot books were both downloaded from Project Gutenberg to my Kindle. Did you know that Jan. 1, 2019 will be the first time in 20 years that old books will be coming off copyright restrictions in the United States?