I’ve been using MATLAB to analyze electricity usage data for our house. I started with the idea that we consumed so much in the winter because the heating was almost continually running. Although we do use more in the cold months, there wasn’t a clear relationship between the month’s average temperature and our electricity consumption. 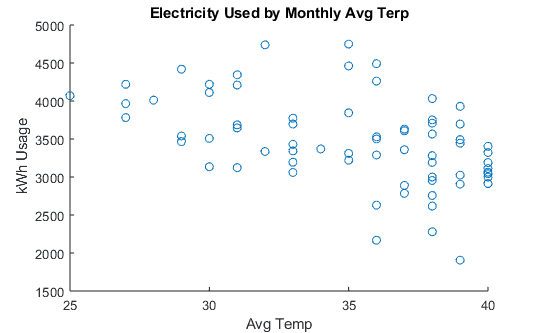 I was surprised. This chart of our electricity usage by average outside temperature shows a wide variance in our usage at the same temperature. For instance, consider the 35 degrees, we used from 3200 to 4700 kWh in different years. Other temperatures have even more extreme usage variance.

In MATLAB, I got to compare numerous curve fittings. The correlation coefficients were always quite low, under 0.2, confirming the observation that our usage depends on factors other than temperature.

Over the 25+ years of electricity usage many things have changed. Our children grew up and moved out .Some visit for a week at Thanksgiving or Christmas. We got a new kitchen and added a mother-in-law suite that was used for a few years. The addition of a sun room along with new attic fan and insulation may have offset each other.

One winter month recently we spent in Florida, yet our consumption was as the thermostat and associated usages were turned up high. There have been a couple of occasions when it appears like another house could be adding their usage in.

However there is countervailing indicators, like off-season months are not particularly high. We appear to have a non-heat pump usage of 1300 kWh.

I sometimes wonder if the power company has a flaw in their measurements. Perhaps at colder temperatures more electricity is lost in transmission to our house than during more temperate weather.

This exercise gave me a concrete task which lead to using MATLAB tables, filtering, sorting, curve-fitting, and plotting.