Imagine this situation. A pigeon is being trained to peck at a lever to receive reinforcement – a typical behavior modification experiment. Let us suppose that in this case the pigeon learns the sequence of desired actions while its head is tilted to the right. The head tilting is not part of the actions the experimenter planned the pigeon to learn, but because of the happenstance of its head’s position (when it learned the proper sequence of actions), the pigeon continues to tilt its head to the right whenever it performs the learned behavior.

That’s pigeons, but what about people and superstitious behavior? 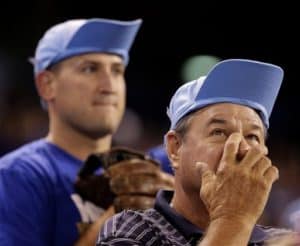 Every one must wear their rally caps the same way for it to work.

Sports figures are notorious for their superstitions. The same socks that must be worn in every game they pitch. Insisting the whole team have fish and chips because that’s what they had on the day of their big victory last season. That sort of association. Something occurred, coincidentally, and ever since they believe it has a role in their performance. And, I certainly am not denying that in a self-fulfilling prophecy way, the superstition can affect the mental aspect of their performance. Yet it’s important to note that their specific belief affects only them and not all others, thus the belief is not a part of objective performance in the sport. The belief is a superstition.

Although this coincidental behavior is called superstitious, it is more prevalent than simple