Usually I study fiction writers. Right now, I’m in an online writers group. To get into a reviewer group, a writer has to take some certification courses. It made me face that I should also re-examine my non-fiction writing more systematically.

Best American Essays of the Century 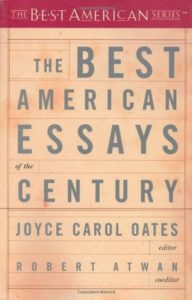 I want to learn from the best. I purchased the collection, The Best American Essays of the Century.

My blog entries and my writing in Mental Construction are essays.

Now I can enjoy these essays as well as study the structure the authors used to achieve their effects. There are fifty-five essays by fifty-five famous writers. These authors range from Mark Twain, Ernest Hemingway, Zora Neale Hurston, and Robert Frost to John Muir, H. L. Mencken, Langston Hughes, Susan Sontag, and so on.

The first essay I picked was “The Creation Myths of Cooperstown” by the evolutionary biologist, Stephen Jay Gould. After I enjoyed his lighthearted expose of the muddle of baseball’s origin, I looked at the fit of his sixty-five hundred word essay into the organization structure I’ve been using since a technical writing class. It gave me my first insight into how flexible the essay form can be–and that I shouldn’t be so rigid in my adherence to that structure.

The aim–one might say a corollary of the thesis–of “The Creation Myths of Cooperstown” comes near the end of this essay published in 1989, the claim that defining personhood as originating at conception is an arbitrary marker along the continuum of fetus development. That perhaps fetal quickening is more meaningful.

Yet after raising this important and provocative point, Gould steers completely away and back to the calmer waters of baseball lore.

My essay Impact : Personhood at Conception develops other worrisome consequences of that definition. Such as, will every pregnancy that doesn’t result in a live birth, be the potential source of legal jeopardy?

The nearly six hundred pages of The Best Essays of the Century will keep me in clover for many happy and productive hours. Even when I disagree with an essay’s substance, I’ll still be learning.